Voiced or Unvoiced -ed Ending
of Past Tense Verbs

Regular past tense verbs have either a voiced or unvoiced -ed ending. This is an important distinction when teaching pronunciation to English language learners. With a simple "trick" and practice, EFL and ESL students can master these sounds.

The "-ed" endings of regular past tense verbs are pronounced in three different ways. They end with either (1) a /t/ sound, (2) a /d/ sound, or (3) an /id/ sound. Verbs ending with an /id/ sound are easier to teach. Determining whether a past tense verb ends with a /t/ or /d/ sound is more difficult for ESL students.

To determine whether a Simple Past tense verb has a voiced or unvoiced –ed ending, we look at the final sound at the end of the base form of the verb (before you add "–ed" to the verb). This tells us if the verb ending should be pronounced as /t/ or /d/.

See my article, English Past Tense Pronunciation for additional teaching tips and strategies.

"Voiced Sounds" Have a /d/ Ending

To distinguish a voiced sound, I have the ESL student determine the final sound of the base form of the verb (before adding the –ed).

For example, for the verb "save," "save" is the base form and the final sound is "vvvvvv." I then ask the student to hold three fingers to his or her throat and make the sound "vvvvvv." I ask him or her if he or she feels a vibration in the throat. If there is a vibration, then the ending is pronounced as /d/: save/d/.

"Voiceless Sounds" Have a /t/ Ending

To distinguish an unvoiced (or "voiceless") sound, again, I have the student determine the final sound of the base form of the verb (before adding the –ed).

For example, for the verb "miss," "miss" is the base form and the final sound is "sssssss." I ask the student to hold three fingers to his or her throat and make the sound "sssssss." I ask him or her if he or she feels a vibration in the throat. Unvoiced endings have no vibration. If there is no vibration, then the ending is pronounced as /t/: miss/t/.

When using this "fingers to the throat" method in a lesson to teach pronunciation of Past Tense verbs and whether the verb has a voiced or unvoiced -ed ending, the teacher really needs to demonstrate how to find out if the sound vibrates or not.

Adult ESL students sometimes feel self-conscious or are otherwise reluctant to put their fingers to their throats and make funny sounds. So I consistently model what the student should do, especially when determining whether there is a voiced or unvoiced -ed ending.

The mistake students usually make during this pronunciation lesson is that they look at the last letter of the base form of the verb and say the letter, rather than the sound that the letter makes.

For example, when looking at the word, "clean," students often say "en" (they are saying the letter), rather than "nnnnn", the sound that the letter makes.

The teacher needs to remind the learner to use the final sound and not the final letter when deciding between a voiced or unvoiced -ed ending.

See Voiced and Unvoiced Sounds for more information about teaching ESL students voiced or unvoiced –ed endings and for the general concept of voicing.

For overall pronunciation lessons and help, I use Pronunciation Pairs: An Introductory Course for Students of English. 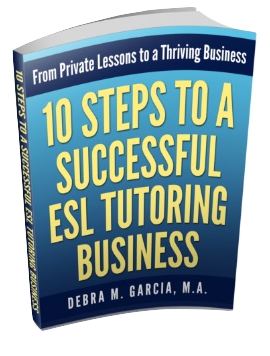 All material on this website is copyrighted (© 2007-2022).
You are free to use my materials in your classes.
I just ask that you include my website address on handouts.
www.Teaching-ESL-to-Adults.com